15 Best Steampunk Movies You Must Watch

Chances are high that you already know all about Steampunk movies. Just in case, this sub-genre is unknown to you, we will explain it. Steampunk movies are set in alternative reality, where humankind didn’t invent electricity.

Most movies feature the 19th century, the British Victorian Era style or Wild West in the United States. As such, steam-powered machines rule the world and they make it spin. Anyway, now is the time to reveal 15 best Steampunk movies of all times (we had to expand the list to 15 instead of the usual top 10 Steampunk movies list in order to fit in more of these great movies), the ones you should watch as soon as possible. We included a movie trailers from YouTube to give you even better idea what the movies look like.

For a more detailed explanation see our article on What is Steampunk and its Origin.

1. The League of Extraordinary Gentlemen

The League of Extraordinary Gentlemen is probably the best Steampunk movie of all times. It is set in alternative Victorian Era and it is focused on a team of superheroes, who are set on a secret mission that should prevent the terrorist group take over the world. The terrorists are led by Fantom and they have the latest (steam-powered weapons and gadgets). The movie was released in 2003 and it features Sean Connery, Naseeruddin Shah, Peta Wilson, and others.

Superheroes you can watch in the movie include Dorian Gray, the invisible man, Doctor Jekyll, Vampire, Tom Sawyer and many others. Let’s just add that famous Nautilus appears in the movie as well.

This movie was released in 1999 and it is one of the most desirable movies to watch if you are interested in alternative history and steam-powered machines. Some of the main actors are Will Smith and Selma Hayek. The movie is science-fiction, obviously, but it has elements of a comedy as well. It is considered to be a parody and one of the most original movies of all times.

The movie is probably older than you. It was released in 1954 by Disney and it is based on 20,000 Leagues Under the Sea book written by Jules Verne back in the 19th century. Main stars in the movie are Paul Lukas, James Mason, and Kirk Douglas. It is one of the first full-length movies released by Disney and it is now considered the 5th best movie this company has released.

The action of the movie is set in 1868 where a ‘’monster’’ of the sea started destroying ships all over the world. The monster is actually Nautilus which is a metal ship able to submerge under water and stay undetected.

Hugo is one of a kind movie. It is actually based on The Invention of Hugo Cabret book and it is set in the 30s. Hugo is a boy who lives at a rail station in Paris after his family dies. His father worked at a local museum but was killed in an explosion. One glimpse of the movie is the mechanical man who was able to write with a pen.

The movie was released in 2011 and it soon became one of the most popular movies which won numerous awards. It is also available in 3D and it is probably the best version to watch today.

5. Sky Captain and the World of Tomorrow

Sky Captain and the World of Tomorrow was released in 2011 and it is set in 1939, in alternative reality where scientists have been taken to work for Dr. Totenkopf who wants to create a world of tomorrow. The movie is actually a member of diesel-punk genre and it is one of a kind.

The movie was developed by Kerry Conran. An interesting fact is that he spend a long period of time typing to make a black and white teaser at his home, using blue canvas and personal computer.

This movie was based on a novel with the same name from 1895. The movie was actually released in the 60s, and a sequel was planned, but it never happened. As you would expect, the movie tells a story of a scientist building a time machine and traveling in the future. He discovers that the humankind is almost destroyed after a nuclear war.

Keep in mind that this isn’t the same movie as The Time Machine from 2002, where a scientist travels back in time to prevent the killing of his fiancé.

Most of you have watched this movie, but you never knew it was a member of the steampunk genre. It was released back in 2007 and it was one of the best movies from that year. It is placed in the alternative universe where a young girl must travel and save children who were taken by an evil scientist who uses them in his experiments.

In order to give you a better idea about the movie, we will add that Nicole Kidman and Daniel Craig (James Bond actor) appear in the movie. Beside it is loaded with steampunk technology, the movie also features animals and creatures from a different universe.

8. Sherlock Holmes: A Game of Shadows

It’s a second sequel of the well-known British-American movie. In this sequel, Holmes is trying to discover the goal of Moriarty. He wants to start a new world war and make a massive profit by investing in war-focused companies. The movie was released in 2011.

This is the movie when apparently Holmes is killed after he stops Moriarty. Luckily, he appears in the last part of the movie again.

The Prestige comes from 2006 and it tells a story of two magicians in the United Kingdom, London more precisely. The story is set in the 19th century, as you would expect from a steampunk movie. The main actors are Hugh Jackman and Christian Bale.

The two magicians are trying to make the best magician trick in the city and they are widely known for their rivalry. Sadly, there are tragic outcomes magicians reach.

The movie was released back in 2008 and it is set in underground city Ember. There, humankind has been living for centuries. Each teenager gets his own job. The city is illuminated by lamps that are powered by a powerful generator.

The generator is designed to run for 200 years, after which humans should move back to the surface. However, the instructions were lost. 2 young adults are leading the quest towards the surface and they discovered that the world has recovered and looks completely different.

Stardust is a British-American movie from 2007. It is set in an alternative world where a falling star is hunted by three witches led by Michelle Pfeiffer. They want to eat their heart and replenish their powers.

The movie is a drama, comedy and fantasy creation that is like no other. Almost every element is different than in other movies, which makes it one of a kind. For instance, Robert De Niro is a captain of a flying ship and he likes dressing like a woman.

Van Helsing is based on the movie from the 30s. The main role has Hugh Jackman who plays a monster-killing superhero simply known as Van Helsing. His new mission will be to kill count Dracula who is known as the first and the most powerful vampire of them all.

On the movie, Dracula is planning to reproduce, but his effort fails. If he succeeds, the world will be ruined.

13. Journey to the Center of the Earth

There were a few movies with the same name from a modern era, but we are referring to the one from 1959. The plot is actually similar. Scientists discover a path to the center of the Earth through a volcano placed on Iceland.

The movie definitely should be watched before modern re-makes due to its original idea and elements. Even today it is known as one of the best movies based on a book written by Jules Verne.

For all of the steampunk fans, the Chitty Chitty Bang Bang will be a mandatory movie to watch. It was filmed and released in 1968 and it is a completely unique masterpiece.

The movie is actually musical with plenty of special effects and songs that were developed precisely for this movie. It is set in this reality, but includes original technologies and developments that are unique to the steampunk genre.

In the movie, Phileas Fogg (Steve Coogan) must travel around the world in 80 days while he is surrounded by numerous threats and obstacles. At the same time, Jackie Chan plays his butler and he protects him. There is no need in adding that the movie is one of the most popular comedies of all times. Here are some more movie ideas.

All of these steampunk movies are excellent examples of the steampunk genre and what it offers. We liked all of them, but now it is up to you to decide which ones will deserve a place on your TV or a computer. Some of these steampunk movies can be found on Netflix for example (there may be some on Hulu also). If per chance you want to see an article about steampunk horror movies (or french ones perhaps), for example, let us know and we will research them for you.

15 Best Steampunk TV Shows That You Will Enjoy To Watch 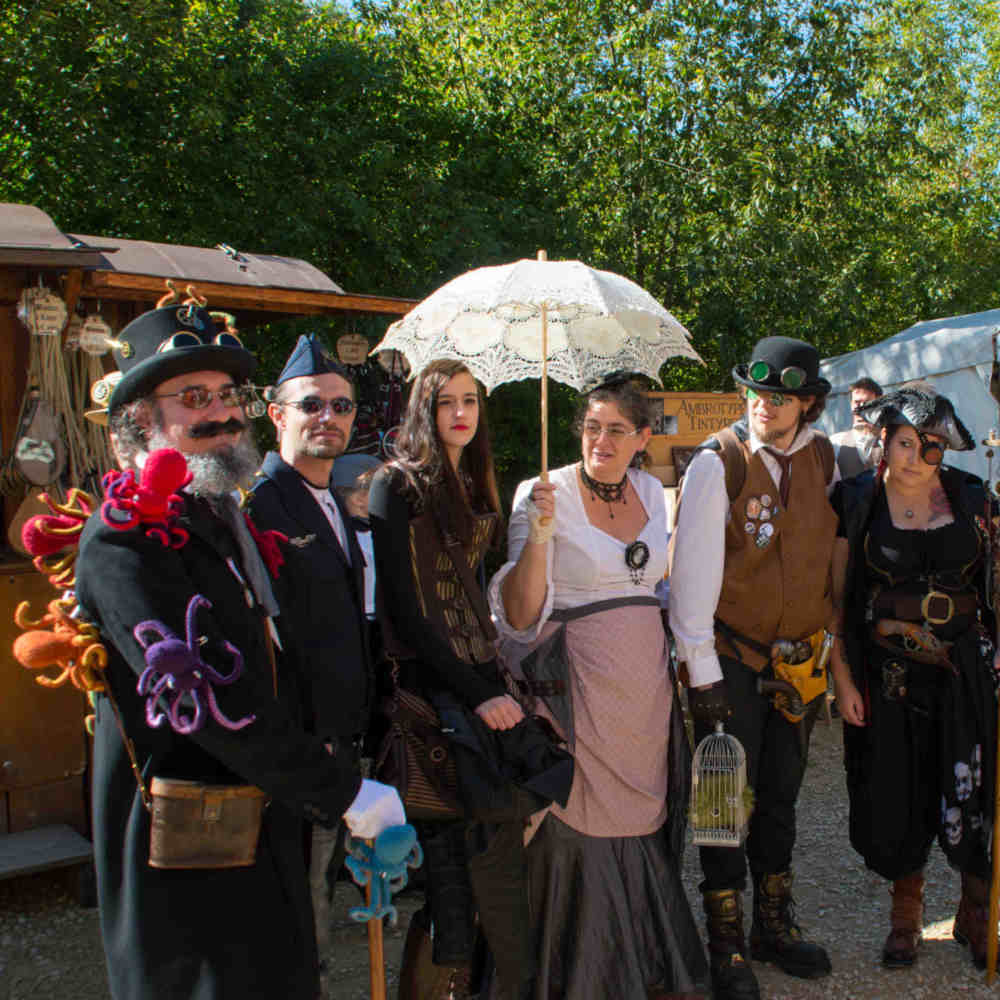